Contrary to popular opinion, the majority of the spiders you’ll find in and around your home are actually beneficial to have around. Mainly it’s because they help to keep the insect population under control. However, there are some types that may cause more harm than good and hopefully, this handy field guide will help you to be able to tell the difference. 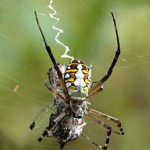 Orb Weavers & Garden Spiders: (Family: Araneidae) These spiders spin the archetype flat wheel-like web to trap flying insects. Some varieties construct elaborate webs in gardens especially in the late summer and early fall. Orb weavers have poor vision and locate trapped prey by sensing the vibration of the threads of the web. In the fall, the female orb-weaver produces an egg sac that contains several hundred eggs which will hatch the following spring. The adult spider can be quite large, with an abdomen that ranges from black to yellow, red, orange, white, brown or green. Garden spiders, commonly seen with black and orange or yellow markings, are usually about 1 inch long and they hang head down in the center of their webs, which tend to be spun in brambles, bushes, and tall grass. Their egg sac is spherical with a narrow end like a hen’s egg and is covered in a tough brown papery silk. Both the orb-weaver and the garden spider are not considered dangerous, but they can bite if you pick them up or otherwise annoy them.

Wolf Spiders: Here’s a slightly comforting fact: Wolf spiders do not normally want to come into your home or any other building and, if they are found inside, it’s because they have wandered in by accident. Here’s an un-comforting fact: they have pretty good vision and like to “actively” hunt and pursue prey during the daytime. Most of the time, wolf spiders can be found in shrubs and high grass, hunting for insects. And what human mother can’t relate to the female wolf spider’s ability to carry her entire brood on her back when it’s time for a road trip? 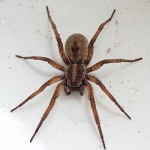 Wolf spiders are not poisonous, but their bite can be pretty irritating depending on your chemical make-up. Should you find one in your home, it’s nice to trap them in an empty jar and politely, yet firmly, escort them outside. However, it’s perfectly alright to swat them with a phone book if no empty jar is on hand.

Unlike some of their less-harmful kindred, black widow spiders can become aggressive when they feel that their egg sac is in danger and will actively bite. And, their venom, while not fatal to humans, can cause a fair amount of discomfort with effects such as overall aching of the body, especially the legs, headache, elevated blood pressure, nausea and profuse perspiration (although this may occur only in severe cases-but who wants to put that theory to the test?).

Male black widow spiders lack the distinctive red hourglass-shaped marking on the abdomen, instead of having red and white markings on either side of its elongated abdomen. The female spider’s fearsome reputation stems from the tendency to ferociously defend her egg sac in the web and the famous fact that female spiders will try to eat the male spider after mating. In contrast to the female of the species, male spiders do not bite humans and if they survive their courtship, they are quite content to live out their days eating what their aggressive better half has caught on her web.

Black widow spiders prefer to make their webs in dark, secluded areas such as woodpiles, under the eaves of your house, in boxes, underneath unused construction materials, inside wooden toy boxes, outdoor toilets, and meter boxes attached to your home. When doing any work in places like these, wear heavy gloves and take a second to inspect the area with a flashlight to avoid any encounters.

Flying ants and flying termites are frequently mistaken for each other. Since both insects swarm so that they can reproduce (talk about speed…

Read More
Recent Posts
Categories
Back to the top