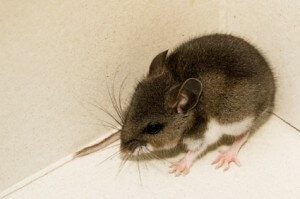 The house mouse is the most common rodent. The house mouse is gray and it weighs one half to one ounce.  The body is three to four inches long and the tail three to four inches long. The muzzle is pointed, the ears are large, the eyes and body are small. Typically, the house mouse is slightly smaller than deer mice.  Typically house mice produce their largest litters in the spring, depending on climatic conditions and begin to breed at five to six weeks of age. The life span is one year. House mice are good climbers, they can jump 12 inches high, and jump down from eight feet. House mice easily squeeze through holes and gaps wider than ¼-inch. They are very social in their behavior, very inquisitive about things in their environment, and readily explore anything new. House mice prefer to nest in dark secluded areas where there is little chance of disturbance, and in areas where nesting materials, such as paper, cardboard, attic insulation, cotton, etc., are readily available. Their foraging territories are small usually no more than 20 feet; however, if abundant food is nearby they nest within four to five feet. They nibble on food, preferring items such as seeds and cereals. They feed at dusk and just before dawn. The major health risks associated with house mice are salmonella contamination and leptospirosis. 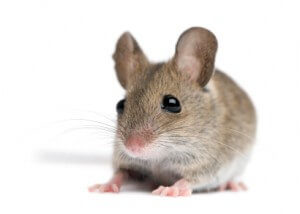 The deer mouse is bi-colored – the upper portion of the body and tail is medium- to dark brown, and the underside of the tail, feet and stomach areas are white. The body is 2 ¾- to 4-inches long and the tail two to five inches long.  The eyes, ears, and body of a deer mouse are slightly larger than those of the house mouse. Deer mice are found throughout the United States. Deer mice are active year-round. Their range of activity is one-half to three acres. They often construct nests in hollow logs and tree stumps, under logs and stones, and occasionally in bird nests and shallow burrows. In the fall and winter, deer mice enter houses, garages and outbuildings, and occasionally campers and other infrequently used vehicles. Once inside these areas, they can cause significant damage to furnishings and stored materials as they search for food and construct their nests. Their typical diet consists of nuts, seeds, berries, and insects. They often store food in their nests for the winter months. They are nocturnal and are rarely seen in their outdoor habitat.

Flying ants and flying termites are frequently mistaken for each other. Since both insects swarm so that they can reproduce (talk about speed…

For many, ant infestations are an irritating nuisance and source of frustration. Visual inspection is the most common method of finding ant…

Read More
Recent Posts
Categories
Back to the top